Wow!! I did really well and managed to read seven books in July!  The Goodreads reading challenge I set myself of 52 books a year is going really well and at this rate I will likely be up it to sixty especially as I now have another bookworm living with me.

A real mix of books this month, from bookclub books to books that were immediately grabbed off the shelves as soon as they were seen and uploaded to my Instagram 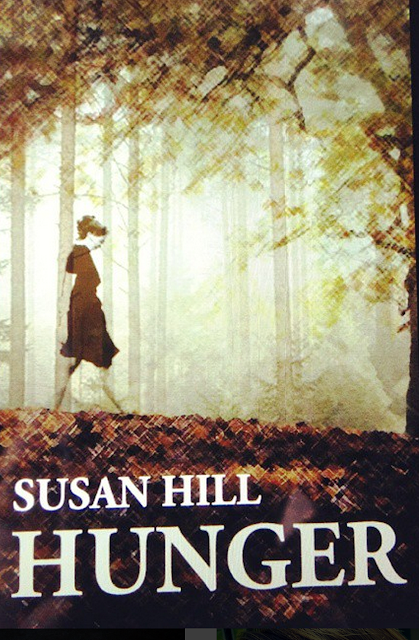 Picked up this short story as I really enjoyed one of Susan Hall’s other short called Women In Black – yes the one they made into a movie. After reading the description I was immediately  hooked but was slightly worried how the story would would flow in such a short format.

The story follows Adrian & Paula who move to the country to escape city life. At first Adrian finds the country idyllic and simplistic and insists on long country walks while Paula struggles to adapt and finds the life to be lonely and dull. That is until three deathly silent almost feral like children start showing up in the woods, the garden and eventually the house itself. The children are an integral part of the story and very terrifyingly well described which grabbed my attention immediately and I wanted to see what kind of role if any they would play in the lives of Adrain and Paula… would any of them form a relationship with one another and if so how and with who?

I wasn’t disappointed at all – a fantastically dark little read, not one to read in the dark. 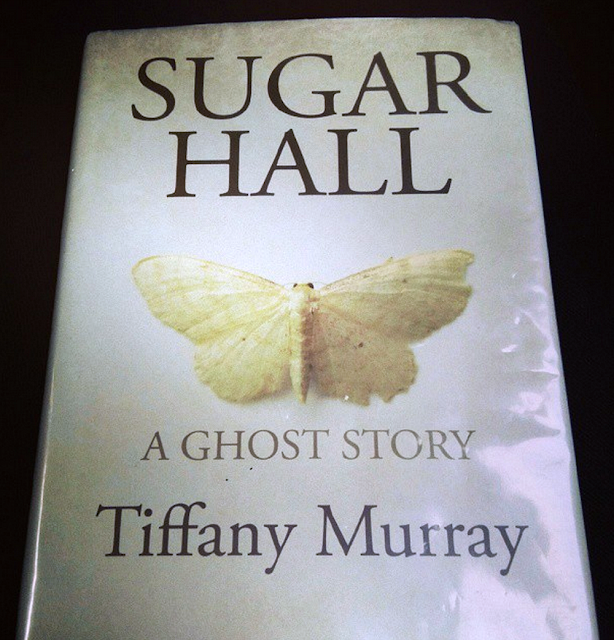 Following on from Hunger I decided to stay on a similar theme and finally get to read a book I had liked the cover of for some time and had been in my to read list for what seemed liked ages. I had seen it in local bookshops and when I finally saw in the library I had to pick it up. The story is loosely based on the hauntings which took place at Littledean hall in Littledean, Gloucestershire and in set on the very edge on the English/Welsh border in the 1950’s, as Britain prepares for it’s last hanging. The gardens of the hall hold a secret and a dark past Lilia and her children must confront a history that is buried but not forgotten…

The book is a slow burner and it doesn’t quite have all the elements of a classic ghost story and didn’t have enough suspense that I was expecting. also I was confused with the slave trade element mixed in with a crumbling mansion owned by a family of German heritage. Also, It may have been down to the fact I had read something in the same genre before or maybe because I am fan of gothic literature I wanted it to be a bit darker.

Maybe at another time I may have enjoyed this book a bit more. 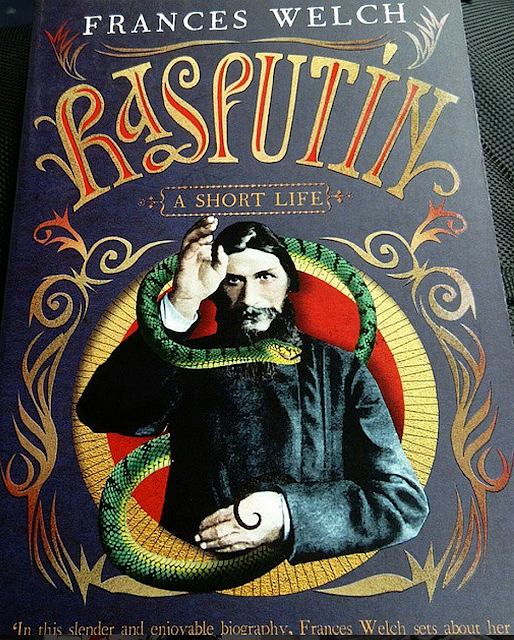 This was a book I saw in Mel’s local Waterstones on my last visit to her before she moved in and I was automatically drawn to it… my only real reference point to Rasputin up until that point was the hammer horror film with Christopher Lee –  so I was up for learning more about his early life and how the legend of mad monk became so infamous. Published by Short Books UK it does a great job of stripping down a notorious someone’s life without missing key points out – some biographies want to tell everything that person has ever done which is why in the past I have tended to avoid reading them but this one was a thrilling read from start to finish regardless.

Rasputin was historical figure who divided opinion then and I think today still does – was he a prophet or a charlatan, a shrewd power player or demented devilish idiot ?

Grigory Rasputin was a Siberian peasant turned mystic who played the role of simple man because of his upbringing but he was sharp witted and infiltrated his way into the imperial court as he seemed to be the only person able to relieve the symptoms of the Tsar’s heir Alexis for which he was greatly rewarded and this one event seems to be the crux for the remaining decade of his life and led a very grand and decadent lifestyle one which ultimately led to his demise.

The biography is eye-opening, elegant and insightful it doesn’t get swamped down by the grand political narrative but casts a wry gaze on one of the great mysteries of Russian history

This is a book that will stay on my bookshelves for a long time yet! 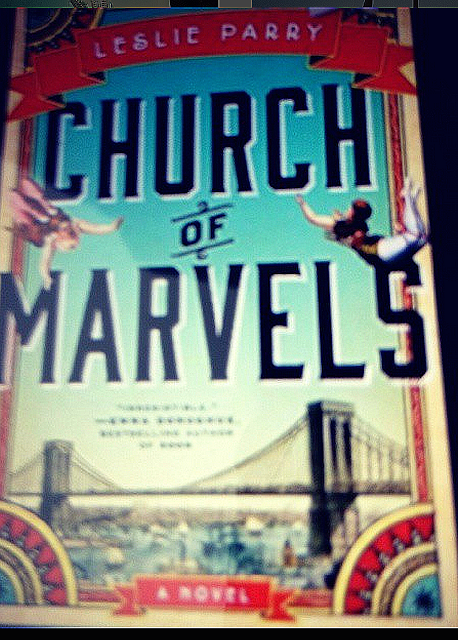 Leslie Parry Church Of Marvels
I wanted to read this as I was drawn to the cover with it’s old circus/sideshow appeal it was a debut novel and also it was advertised as being similar to The Miniaturist by Jessie Burton a book that I greatly enjoyed it.
The story is set in New York in the 1890’s which is described in the book as a city of hardship and dreams, love and loneliness, hope and danger which does give it a good atmospheric theme to start with.
The story focuses on Slvan who finds an abandoned baby and as she was orphan herself she is determined to find out where the child belongs. Odile Church and her sister Belle who grew up with the rapture of the crowd and the spectacle of The Church Of Marvels which was their mother’s Sideshow in Coney Island are also a major part of the story. The Sideshow is now just a distant memory to Belle who has since vanished and Oldie is desperate to be reunited with her. Lastly, a young woman named Alphie wakes up to find herself trapped in a lunatic asylum and feels that the only reason she is there is because of her husband’s overbearing mother
The story tries to increasingly connect these strangers lives but it felt like three different stories in one book which left me feeling that some of the characters had been better developed than others I did enjoy the sideshow element of the book as I was watching American Horror Story: Freakshow at the time but wasn’t enjoying the sideshow element of the show – this had some of what I was looking for but still not quite enough
I think another reason I didn’t particularly enjoy was when you advertise a book to be the next big thing it that particular genre another and you enjoyed the other book more you are always going to compare. 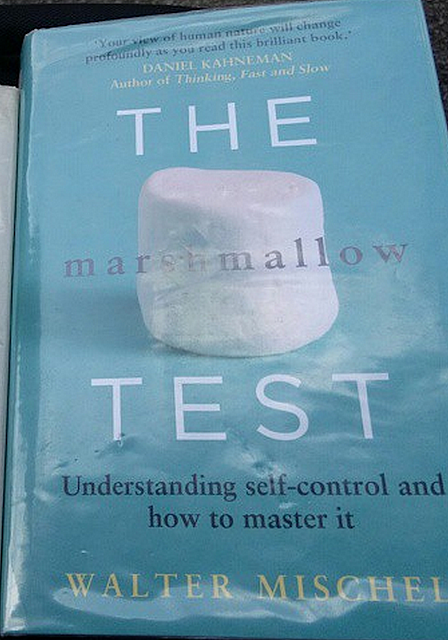 Walter Mischel The Marshmallow Test : Mastering Self-Control
I saw someone else reading this on a coach and my first thought was oooh a marshmallow!! I would like to point out it was a very long coach journey and I was really hungry 🙂 having a quick look on Goodreads I decided I liked the idea behind the study enough to take the time to explore it bit more
The book explores and experiments with the theory that the ability to delay instant gratification leads to success in later life and whether willpower is pre-wired or can be taught – the experiments start with children who are given a singular marshmallow and told if they don’t have it straight away they could have an extra one which leads to the dilemma they then face sometimes with some highly amusing anecdotes
From this point it does drag and it’s very much based on the personal opinion of someone who claims to be world’s leading aspect in this particular field rather than present anymore case studies to back up how self control can help you give up smoking, get over a break up etc and doesn’t mention cognitive behaviour therapy at all. I know it’s all theory but it’s not one I am going to take on board – it’s been a while since I have read a psychology book hopefully the next one I read will be more my thing. 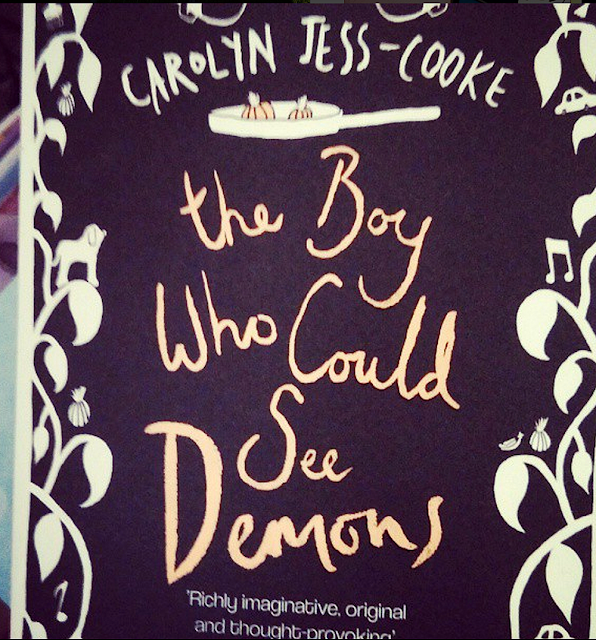 Carolyn Jess-Cooke  The Boy Who Could See Demons
Gotta love my Nan – she held on to this book for me for ages as she picked it up in a charity shop because she thought of me, well I am her favourite 🙂 – she told me when she gave the book that she wouldn’t dare read it as it would give her nightmares, this coming from a woman who watches non stop Star Trek and alien conspiracy programmes when I was young really made me laugh – yep my Nan is awesome
I had been guilty of forgetting about this book for ages and I didn’t want it to be one that just stayed on my bookshelves and I am glad I read but it was dark, much like I’d been told already.
The book is about a 10 year old boy called Alex who casually has a imaginary friend – nothing wrong with that really but he’s a 9000 year old demon called Ruen. At first I thought it was going to quite light hearted and full of misadventure but in fact the book explores the demons of the mind rather than that of the fantasy and horror kind and quite softly explores things like depression, suicide and schizophrenia.
The story is hard going as Alex’s mum who is depressed tries to commit suicide once again and Alex is referred to a child psychologist Anya who is herself dealing with her daughter’s own schizophrenia and is instantly worried by his mental health but the harder she tries to convince Alex that Ruben isn’t real the more questions she has about life, love and death in general.
A lesson in not judging a book by it’s cover – it was a good read dealing with some tough issues and one I’m glad I took the time to read. 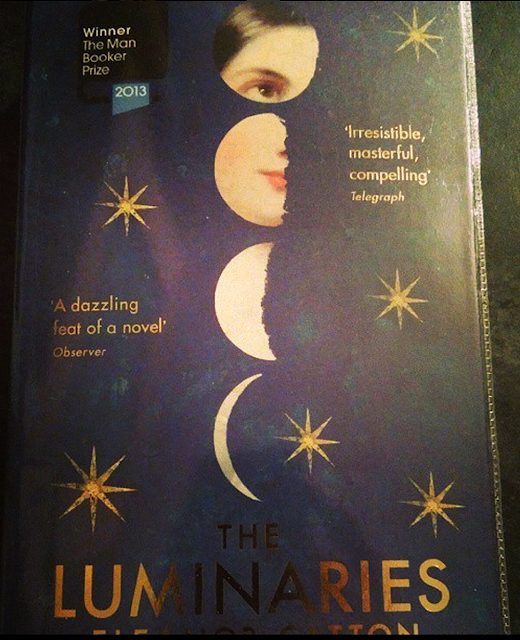 Eleanor Catton The Luminaries
I love the Man Booker Prize – out of all the literary award ceremonies it is my favourite and  I always eagerly await both the long and short list – the last book on my list for this month won the prize in 2013 and was a local library bookclub pick – I would like to add not mine, can you tell where this is going?
I don’t mind reading long books – I’ve recently finished A Little Life and got on with that fine but this was something else…
Set in 1896 and focusing on the ninteenth century’s world of shipping, banking and the gold rush… the book attempts to be a fast turning ghost story but the problem is that the key characters who are mentioned in the early part of the story disappear for around 400 pages of nothing – no character development and you forget it’s actually a ghost story as you are constantly flicking back trying to get a point of reference.
I found myself finding excuses to put this down and nearly for the first time ever gave up on a book! I have little more to say because I disliked it that much I let out a little cheer when I got to the last page.
So that’s it for July’s reading – more to come in August and Aeptember as I have again had some review copies through and me that I’ve been happily getting through.
Have you read any of these books? do you have any recommendations?